For Such a Time as This

Honouring the History of Innovation and Community at Tyndale 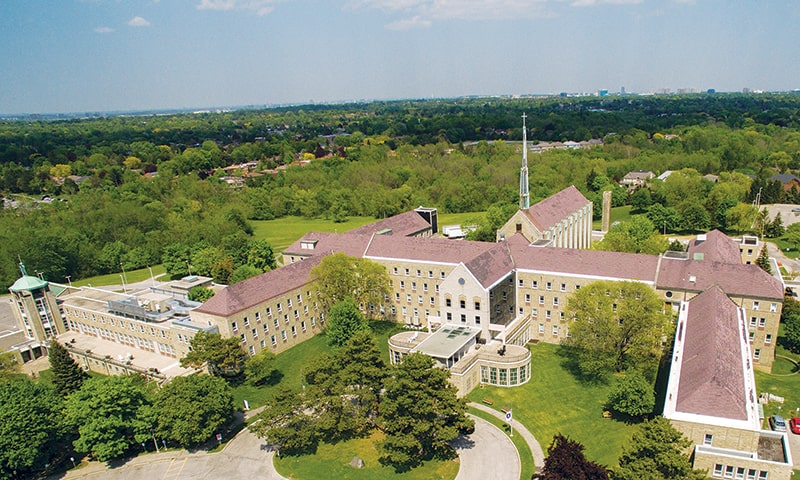 In the late 19th century, there appeared to be an insurmountable problem. College and university campuses were experiencing revival. Many young people were being challenged to a commitment to Christ for world service, and they were responding in unprecedented numbers. The Church was becoming world conscious, and the need for biblically literate women and men became more and more obvious.

However, many educational institutions, once evangelical and biblical, were embracing modern theology, contradicting the foundational truths of the Christian faith. Students were therefore in need of a Christ-honouring educational program that would equip them for the challenge of world service.

This was the problem – a growing opportunity for Christian service at home and overseas, but a lack of trained people. Dr. A. B. Simpson was the first to seek a solution. He had already established the Christian and Missionary Alliance with missions in mind, and in 1882, he founded Nyack Missionary College. Mr. D. L. Moody saw the same need, and he was led to establish in 1886 what was subsequently known as Moody Bible Institute. Thus began the Bible College movement.

In 1894, Dr. Elmore Harris, a Baptist pastor in Toronto, felt the need for such education in Canada. He consulted with Mr. Moody and then with other Canadian church leaders. In that same year, Toronto Bible College was founded. Its purpose was to be “the training of Christian men and women for the service of the Lord Jesus Christ at home and abroad.”

For more than a quarter of a century, it was Canada’s only interdenominational Bible College, dedicated to the teaching of the Bible as the inspired, infallible, inerrant Word of God. For many years, it was the Canadian source for an ongoing supply of pastors, missionaries and other Christian workers. It was the first to enroll women and laypeople.

Over time, it became understood that a particular educational experience was needed to continue to prepare students for service. It was at this time in the mid-1960s the London College of Bible and Mission (LCBM) and Toronto Bible College began discussing their mutual needs and challenges. Both institutions agreed to merge in 1968 to form Ontario Bible College. The merger also brought to fruition a unified vision to provide graduate-level education to graduates of Canadian universities and accredited Bible Colleges, and in 1976, Ontario Theological Seminary was launched.

The merger opened the door to again think differently. LCBM had been exploring the possibility of granting a Bachelor of Arts degree in conjunction with a local university. In many ways, the vision for the university education that Tyndale offers today can be traced to these initial concepts and innovative vision of LCBM.

A deeper philosophy of Christian education and a much wider scope in curriculum to meet the growing, complex demands of an increasingly complex world began to emerge. Programs offered began to multiply beyond teaching English, Bible and missions skills. A greater emphasis on the humanities and human services skills (social work, developmental service work and early childhood education) were introduced.

Just before the turn of the 21st century, there was recognition that much of the training for pastors and traditional full-time ministry vocations was taking place at the graduate, seminary level. Observation of student pathways beyond graduation demonstrated that many were integrating into the business world, taking the hope of Christ with them, and into other universities for additional education. The question was how could Tyndale best serve students who were seeking to grow in their biblical literacy and to serve Jesus in a variety of other ways. The idea of becoming a provincially recognized university was reignited.

Today, 125 years later, it is apparent that Tyndale never deviated from its roots. We celebrate the forward thinking and innovation within its ethos. The university college degrees are provincially recognized. Graduates are working in a vast array of occupations and pursuits. The seminary is now the largest graduate school of theology in Canada, serving annually over 1,000 students from 40 different denominations and 60 ethnic groups. Tyndale is much more than a pastoral and vocational-ministry training school, and its students – from all walks of life, traditions and cultural backgrounds – are seeking to live lives that actively engage the key questions and issues of today, bringing with them the gospel message of hope.

The Open Learning Centre was added where several centres are located – The Leadership Centre, The Tyndale Intercultural Ministry Centre, The Spiritual Formation Centre and The Family Life Centre. Together, these centres enable Tyndale to reach into the community and serve various groups in ways traditional academic institutions are unable to.

Throughout Tyndale’s history, there have always been what appeared to be insurmountable issues. Words written by Rev. Stewart Boehmer in 1967 still ring true today. We have “experienced deep trials and difficulties…, but God has not forsaken us. His hand has been upon us at a time when we could not have charted our course or even kept afloat. This fact proves conclusively that far from casting us aside, God has sustained us because He has great things in store for us. He might well have cut us adrift, were it not for the fact that He brought us into being for His own peculiar purpose and glory. God be praised that He has not removed His hand of blessing from the first day until now. Therefore, we can face the future with the confidence that He Who has begun this good work will perform it until the day of Jesus Christ.”