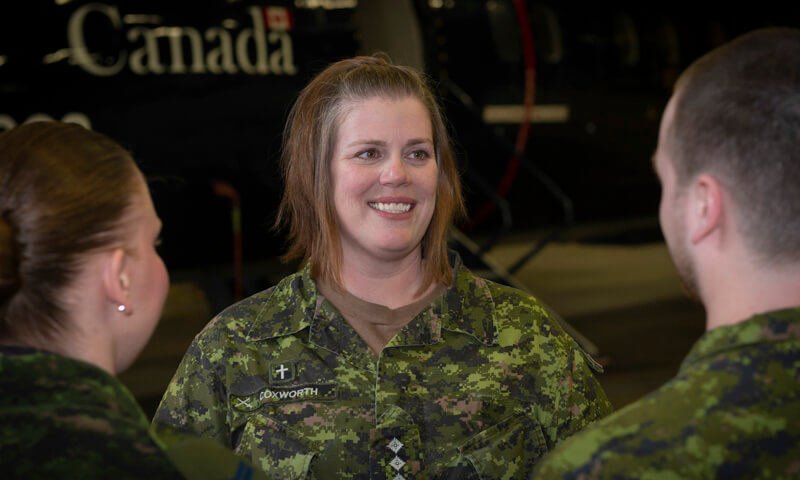 Laura Coxworth [MDiv 2015] is the first female chaplain of the Pentecostal Assemblies of Canada (PAOC) in the Canadian Armed Forces. Her journey with the military began as a civilian working on contract positions overseas, including Kandahar, Afghanistan. She came from a background in the financial services sector and was looking for a change.

Her experience with the military reawakened her calling to ministry. “I was coming back to the idea of pastoral ministry after 20 years when I realized I could do full-time ministry in the military,” she shares. “My pastoral heart was emboldened and enlarged by the idea that I could help Canadian Armed Forces members, who are being asked by the nation to do difficult things. Studies show that spirituality increases resilience, which, in turn, contributes to overall health and well-being. We want our members to be healthy and whole.”

As a mature student, she found that Tyndale offered a variety of options towards earning her MDiv efficiently. “My Tyndale experience was great. It expanded my understanding of faith and God and the people in the family of God.”

During her studies, Laura received both a scholarship and a bursary, something she deeply appreciated. “Someone invested this money. It’s more than just financial, it’s an affirmation of calling, affirmation that those who have gone before are passionate about investing in the next generation, and that’s more priceless than the actual sum,” she says candidly.

She discovered that only a few scholarships were available for pastoral ministry and wanted to change that somehow. She started saving, knowing it was something she would have to build up over time. As the years went by, she asked friends and family to donate to this fund. When the time came, she named the scholarship after Corporal Chad O’Quinn, who was killed in action in Kandahar in 2009. “He was someone I met in Kandahar,” she recalls. “His presence left an impact. He was known as a man of deep faith.” Tyndale students interested in military chaplaincy or Canadian Armed Forces veterans pursuing ministry as a vocation are eligible for this particular fund. The fund has provided support for four seminary students since its inception.

“My heart is to facilitate the study of ministry in a way that other people did for me. Also, when people see this award listed, they would remember both Chad and the importance of military chaplaincy,” she says.